Although this blog is dedicated to showcasing and uplifting the Hawks community, there are many positive activities performed by NBA players around the league. In this section, we will highlight players or teams who are making an impact in their communities.

Dwyane Wade thought that tonight's Heat-Knicks game should have been postponed. It wasn't, so he announced that he would donate his pay from the game to a charity designated for Hurricane Sandy victims.

"The money I make tonight can be left for a good cause," he said. "I know a lot of people here. Knowing the things they have been through, it's just mind-boggling. Miami is a place that is affected by hurricanes all the time so I know how the community can be impacted by it. It's tough."

D-Wade and his teammates are currently still looking for the right charity.

The following was tweeted by @NBACares: 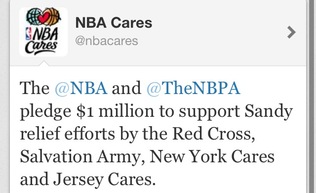 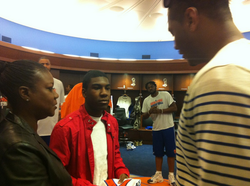 New York Knicks Forward Carmelo Anthony invited the family of slain South Florida teenager, Trayvon Martin, into the Knicks locker room in order to meet them and apologize for their loss.

While this may seem like a small gesture, I'm sure it meant the world to the Martin family.

Kudos to Carmelo Anthony and the New York Knicks for making this happen. 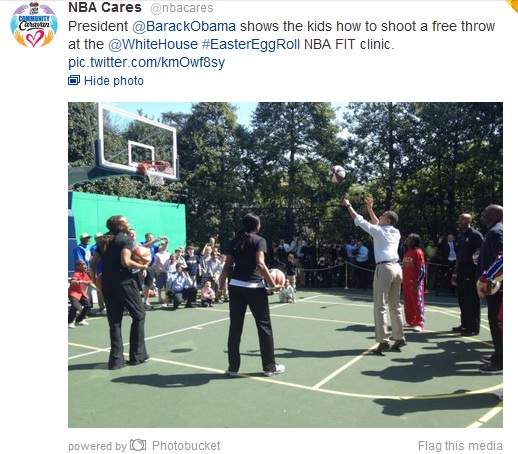 Every year during NBA All-Star Weekend, the league dedicates a day to community service. Check out some of the various ways that players gave back this year. 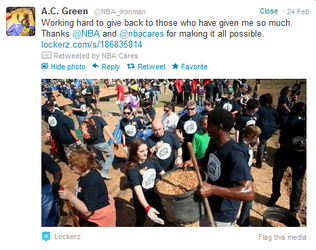 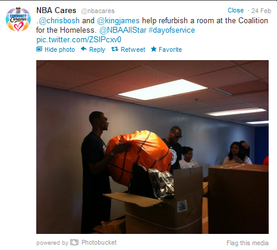 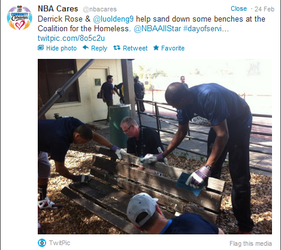 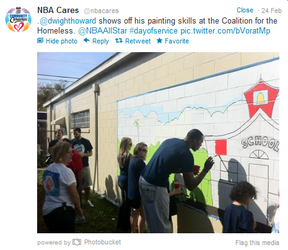 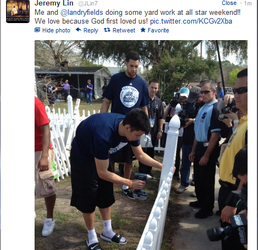 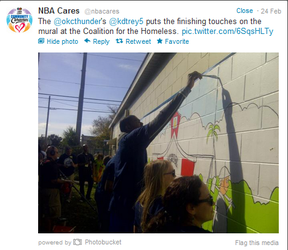 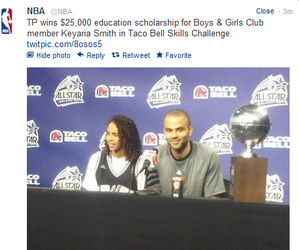 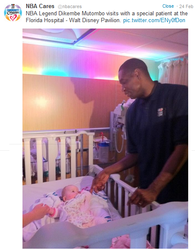 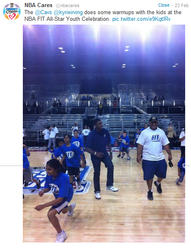 George Hill Rises To The Top 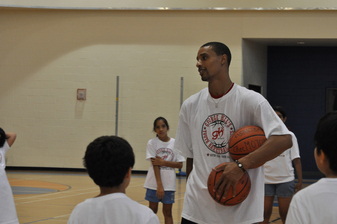 (Photo: http://www.utbathletics.com)
George Hill, who is most known for his big impact on the San Antonio Spurs coming off the bench in the 2010-2011 season, is one of the newest faces on the Indiana Pacers. The city of San Antonio was sad to see him leave, but Indiana is glad to have him back! George is from Indianapolis, Indiana. He started George Hill Rising Stars, Inc., a non-profit organization that is based in Indianapolis. They have a goal to "impactfully touch the lives of young boys/girls and be positive role models as they mature into young men/women."

George Hill finished fourth in the 2010-11 NBA Sportsmanship Award race and was awarded $5,000 from the league on behalf of the organization. "Growing up and no one giving me anything in life, I told myself if I was that player to make it out, that I'm going to be that player to give back,especially to the youth, because no one did it for me. How I was brought up, no one wanted to do anything for me, so I wanted to be that rock in the city, the kind that kids could lean on," commented George in a recent article.

This past summer, George Hill hosted a free youth basketball clinic at the Boys and Girls Club on July 19 in Port Isabel, Texas. Events included a signature basketball clinic for youth at the Boys and Girls Club of Laguna Madre, a community BBQ and an appearance at a restaurant. Proceeds from various events associated with the clinic went to George's foundation. Through the foundation, basketball is used as a vehicle to teach life skills such as; commitment, positive reinforcement and team/hard work. Everyone involved lives by the motto of G3: Guts, Grind, and Glory.

For more information, go to http://g3risingstars.clubspaces.com/Default_css.aspx. 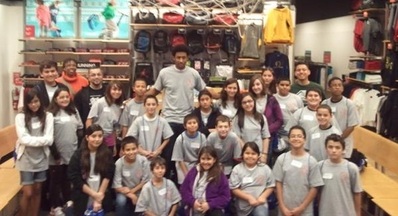 Retrieved from @SunsCommunity
As a part of the Phoenix Suns' Week of Giving, former Atlanta Hawk Josh Childress hosted his annual Flicks 'N Kicks event. Twenty-five children from the Boys and Girls Club had the opportunity to spend the day with J-Chill as he brightens their holidays. J-Chill joined the children for a private viewing of "Arthur Christmas" at the movies. Following the movie, he took the kids to Finish Line and bought a pair of shoes for each of them. Once the children were done shopping, he treated them all to dinner and games at Dave & Buster's. What a fantastic way to spread the joy of the Christmas season. 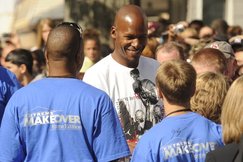 Mark Brendel/ABC via Getty Images
In April 2009, an eleven year old boy named Joseph Walker Hoover took his own life to free himself from being a victim of bullying. His mother, Sirdeaner Walker, became a spokeswoman for antibullying campaigns after tragically losing her son. This past September, Extreme Home Makeover gave the family of Joseph Walker Hoover a new home. Ray Allen of the Boston Celtics made a surprise appearance to the delight of Joseph’s little brother, Charles Hoover, who is an avid Celtics fan. The little boy “smiled, bounced, then ran to him, disappearing into Allen’s blue sweatsuit as they hugged,” reported the New York Times.

Due to the NBA lockout that was in effect during the airing of this show, Ray Allen’s scenes were cut out of the episode. Allen was disappointed, not because he wanted the face time, but because it was a memory for Charles Hoover and his family that they did not get to see on television. Therefore, Ray Allen made a special trip to Charles’ school to hold an assembly on bullying and to make sure that all of Charles’ friends knew about his famous NBA friend. This is a wonderful story about someone going above and beyond what they are called to do for the benefit of others.

Here's a video showing JaVale McGee of the Washington Wizards helping out other families in need during the holidays:

NBA teams are expected to hold open practices and scrimmages to compensate the fans for what they endured during the NBA lockout. Stay tuned to find out if/when the Hawks will have theirs.

NBA players continue to give back in spite of the lockout

The NBA lockout has all of us hurting. However, no one is suffering more than those who work at the various arenas in order to make a living. These employees are left jobless with no benefits whatsoever to help them make ends meet. Some players have taken it upon themselves to do their part in providing relief to some of these employees. Danny Granger of the Indiana Pacers tweeted that he was inviting all of the arena workers at Conseco Fieldhouse to a dinner on him. Kobe Bryant and Luke Walton both made sure that some of the money from the Lakers’ playoff bonus went to two video coordinators who were laid off as soon as the lockout began. Additionally, Walton gave an undisclosed amount of money to the Lakers training staff. Several players across the league have put together charitable exhibition games around the country for their fans. Although the efforts by the players have not eliminated the suffering caused by this lockout, it is refreshing to see that they are not just thinking about themselves.

*Head over to the Community page to see what your Hawks have been doing during this lockout.

You Don’t Have To Believe In Magic To Support This

On the court, the Atlanta Hawks and Orlando Magic aren’t the best of friends. But when a player loves to support the community, rivalry and competition are put to the side! Chris Duhon, guard for the Orlando Magic, formed the Stand Tall Foundation in 1998. After creating the Chris Duhon Hurricane Relief Fund to support his efforts in providing aid to his hometown of Slidell, Louisiana, devastated by Hurricane Katrina in August 2005, Duhon revived his foundation and formed the Chris Duhon Stand Tall Foundation in 2007.

The Chris Duhon Stand Tall Foundation is “committed to building up children who are the foundation of our communities.” The Foundation is responsible for replacing library books for elementary and high schools, purchasing uniforms (which are required at public schools in Slidell) for elementary schools, donating funds to high school athletic departments, providing financial assistance for the rebuilding of the Boys & Girls Club of Slidell, and much more.

The Foundation notably has an annual Stand Tall Foundation Scholarship for graduating seniors in St. Tammany Parish Public Schools. The $5,000 scholarship award is to be used at a four-year college or university. Last year, five deserving students were awarded a scholarship.