Who started all of this? Read on to find out... 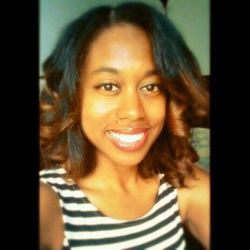 Contributor. Photographer. Videographer. Editor. The dabble is real. JJ bka Jameelah Johnson found a love for basketball through the Atlanta Hawks shortly after graduating from college. Always a surface fan of the game (with initial fandom of the Nets - Jersey, stand up! - and a Celtic player or two - gasp!), she appreciates all there is about the sport of basketball and the players in the NBA and WNBA. Her infatuation with sports doesn't stop at the NBA/WNBA, she's a big Yankees fan and an observer of most of what ESPN highlights (tennis, futbol, football, etc.). Jameelah's sports skills fall into the category of "nonexistent," as she tried out for the high school basketball team in the 9th grade and never looked back.

Jameelah graduated from Spelman College in 2008 with a Bachelor of Arts in English and Spanish (and a focus on Journalism through internships, both broadcast and print). She has lived in New York City while doing a fellowship with WNET and attended graduate school at New York University. Jameelah currently lives in Georgia where she loves spending time with her family and enjoys going to sporting events (and being silly from time to time). 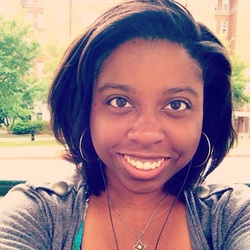 Melanie Watson, is a senior Journalism student at the University of Georgia. She claims the Atlanta Hawks as being her first love. Melanie loves all things NBA and celebrates NBA All-Star Weekend as if she’s an All-Star herself.  She collects basketball magazines like they're stamps.  During the Hawks offseason, Melanie likes to cheer for the New York Yankees and considers herself a huge Curtis Granderson fan. When she’s not watching sports, she enjoys social media and music in addition to hanging out and laughing with her family and friends. 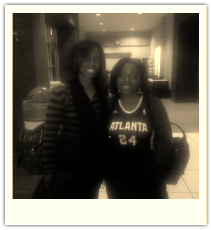 Jameelah & Melanie meeting for the first time - where else, but Philips Arena :)
You can always shoot us an email  if you have any questions or want to submit something to us!
*Disclaimer* The views expressed on this website are solely those of the creators and are not to be confused with those supported by the National Basketball Association, the Atlanta Hawks, or any other N.B.A. franchise.