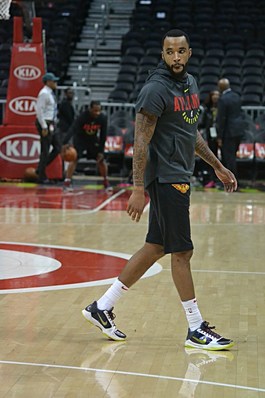 Delaney rocking the Nike Zoom Kobe 5 "Chaos"
He's not new to this. If you know about Atlanta Hawks guard Malcolm Delaney, then you know about his sneaker game. While he can hit defenders with a step- back jumper or make it to the rack to draw the foul, he can also turn heads with whatever he's rocking on his feet, "I just try to do different stuff."

Finding the backstory on just how the 28-year-old Baltimore-native drops some of the hottest kicks in the game was my goal. When did it all start? "When I was a baby. *laughs* No, for real, though. Like, my parents...that was one thing when I was growing up. If I didn't have anything else, I had on some Jordans." Delaney's father played basketball, so basketball shoes were almost an innate accessory for him and his older brother.

Since sneakers are second nature to Delaney, he couldn't pinpoint the first pair of kicks he really wanted, but he did recount a story of the first pair that had people talking. "The first pair of Jordans I really remember is the black and olive 9s. Jordan 9s. That's just because the color, they were like black and brown so people was looking at them like, 'Why you get those?' Basically, the color wasn't normal for a pair of Jordans. So it was like a weird colorway. And I was real young so it was kinda...it wasn't like they was making fun of the shoes but they was making fun of the color."

Delaney doesn't consider himself to be a "sneakerhead" in the traditional sense because he oftentimes doesn't even know which will be the newest pair to drop. Instead, his acquisition of sneakers is more of a hobby. He can go months without thinking about copping a pair to waking up in the middle of the night, inspired to get some heat. "I don't know. Last week I woke up at four in the morning and went on eBay and ordered some shoes. *both laugh* Nah, for real, I be thinking."

One quick scroll down Delaney's Instagram page and you'll find the proof in the pictures. Joining the Virginia Tech basketball team, it was known that players wore team shoes. That was...until Delaney arrived. "My freshman year, my coach wouldn't let us wear anything but team shoes, and I kinda broke that trend and started wearing different stuff." Going overseas didn't stop him from bringing oohs and aahs to those who admired what was on his feet. In Russia, he even rocked over 40 different pairs in just 60 games.

Delaney's been a Nike athlete since high school so his affinity to the brand is strong but, as an international player, he once had to wear Adidas for a team. That didn't stop him from digging in the crate and breaking out throwbacks and kicks few would wear. How does he choose what he'll roll with for games? "It's just random. Sometimes, I'll think about shoes and sometimes I won't. I don't know the next pair of Jordans coming out. As far as gameday stuff, I just like to wear different stuff. Stuff that people don't wear and then sometimes if I don't care, I'll just wear the same, normal stuff."

Delaney isn't alone in being a head-turner in the sneaker game out of the Hawks locker room, forward Taurean Prince has been highlighted for his latest Adidas additions. As referenced before, Delaney is familiar with the three stripes as well, "The stuff that [Taurean's] doing now, I mean, when I played overseas I had to play one year in Adidas. The stuff he be doing now, I was doing awhile ago. When I was wearing Adidas, I would go back and wear all the old Adidas."

Delaney added that Prince has put his own touch to the kick game. "But now he's starting to get them custom and stuff like that. So he's just making the Adidas shoe look a lot better. But as far as like...Nike is just unlimited." A little friendly back and forth between Prince and Delaney can be found on their Twitter accounts, where the teammates sometime show the fire they dropped.

If anyone is interested in jumping into the game of basketball shoes, Delaney offers some advice for them, "My thing is just don't go with the wave. I mean it's some sneakers that's hot that everybody wears but it's a lot of stuff out here that it's just a lot of hype and people will buy it just because of the name or whatever but I only get stuff that I like. If I don't like it, I'm not buying it." He adds that he'll give props where props are due, but he doesn't wait to see what the next person is wearing to know what to cop.

Rocking the same pair of kicks multiple times means one of two things for Delaney: they're comfortable or the colorway sets off the uniform. "More so if I wear them a lot, it's comfort."

If you don't already, take a look at what Malcolm Delaney puts on his feet the next time he hits the court. He just might inspire you to put some fire on your feet.

1. Delaney often gives away sneakers after he's worn them a number of times. He'll gift them to fans, friends and family, especially his father.

2. His parents used to get him and his brother the Jordans that came out every two weeks on Saturdays, as long as they did well in school. When asked if that was his incentive to do well, Delaney jokingly said, "Yup, they bribed me."

3. Unless he's dressed in a sweatsuit or something comfortable along those lines, he tries not to wear Jordans with his outfits. "I don't know, I feel like I'm too old for that."

4. Delaney prefers to wear his kicks brand new for games. "I have skinny feet so I like wearing my shoes when they're brand new. A little bit broken in but I like them tight on my feet. That's why I wear so many different pairs of shoes."