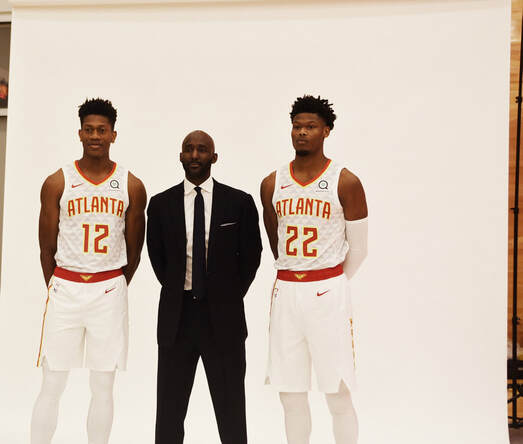 ​Shootaround has just ended and player availability has begun for the Atlanta Hawks. With chairs lined up across the stacked up bleachers, I find the two players I'm looking for, rookies De'Andre Hunter and Cam Reddish. They're sitting next to each other, laughing at a seemingly private joke only they understand. You'd think they were childhood friends from way back. Cam often waits for De'Andre as he finishes his time with the media, they exchange glances and chuckle while being interviewed, they're often found together talking during pregame warmups. In actuality, the two Pennsylvania natives knew of each other since roughly middle school but only began talking once they were drafted by the Hawks.

When they were younger, Cam played under Nike while De'Andre played with Under Armour. They're currently both signed to Nike.
De'Andre: Only time we saw each other was like...in the neighborhood. *both laugh* 'Cause he went to, you went to Haverford? He went to Haverford and I went to Friend's Central. It was like, right there, and that would be the only time we'd see each other, just in passing.

Both players have a quiet disposition about themselves and that's what they attribute to making their friendship so natural.
De'Andre on how he'd describe Cam's personality: I mean, he quiet.
*Cam interrupts to say the same about De'Andre*
De'Andre: We talk to each other. I mean we kinda the same. Laid back. Chill.
Cam: We really similar. That's why we get along probably. *both laugh*

When the team is traveling, they can often be found right around each other. Take a look at photos or videos from practice and there will more than likely be something showing the two together.
De'Andre: On the road, we probably be with each other more but at home, we got our own stuff to do. Every now and then, we'll get together and do something.
Cam jokingly interjects that De'Andre doesn't like his dog, but De'Andre, neither confirming nor denying it, says he's just not a pet person in general.

Shifting to the court, that connection plays out in more ways than one, De'Andre assisted Cam on his first NBA three pointer, while Cam has been able to pinpoint exactly where De'Andre is before defenders know.
Cam: I know, for me, I always kinda know where he's at on the court because, I don't know, we're both rookies and we're both going through the same battles and stuff. I kinda keep it in mind like when we're playing.
De'Andre: Yea. I mean, we kinda play the same position. So it's like, where I'm not, he probably is there. So it's like a give or take.

With the vast change that can come from entering the world of the NBA, it's refreshing to have a familiar face going through the same experiences.