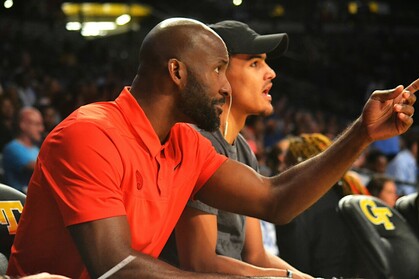 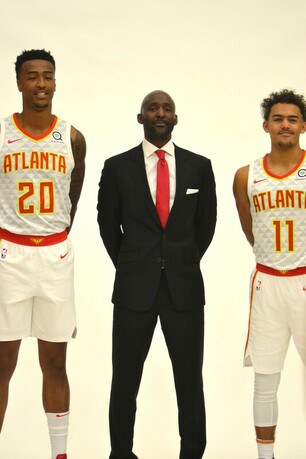 Head Coach Lloyd Pierce with John Collins (left) and Trae Young (right).
"Then you figure out why you really got dropped in the Dirty South" - Goodie Mob

Arena security motioned towards the media to make their way to the lower bowl of the Toyota Center. The Atlanta Hawks were on the floor, running drills, finishing up shootaround ahead of a matchup that would include reigning MVP James Harden and perennial point guard Chris Paul. The contest would be a hard-fought one, where the Hawks would go toe-to-toe with Houston, ultimately losing the game by eight points. Atlanta's head coach Lloyd Pierce stood on the sidelines, focused on what his players were doing on the court. Generally, much of what the media catches at shootaround isn't the nitty gritty of what the team does, but LP (as he's called by pretty much everyone) couldn't take his eyes off his players. I asked him if he'd like to sit down because I had a number of questions but he quickly, kindly, and emphatically declined my soft suggestion wrapped in an inquiry. The 42-year-old coach has been known to step foot onto the court to show his players he can still hang with the best of them.

"Listen to me now, believe me later on…in the future" - Goodie Mob

The first year for any profession can be a daunting task. Learning the ins and outs of a new space, new city and even new personnel add to the pressure of wanting to perform well. The first year for a new NBA head coach is no different and LP went all in, in more ways than one, when he took the Atlanta job.
One day, will be my last day, it won’t be about ‘did I draw up the right play or anything like that’ it’s if I lost the atmosphere or if I lost the players. So it’s always gonna come back to do the guys believe in me, does management believe in me, does the city believe in me? - LP

When the announcement that the Hawks would bring in LP as their new head coach rolled out, players from around the league offered their congratulations. Lloyd has long been considered a "players' coach" because of his ability to relate to the players having been in their shoes as a professional. He is so often thought of that, as I asked Chris Paul postgame about his thoughts on the growth of Atlanta's John Collins, fellow Wake Forest alumnus, Chris had to share his thoughts on LP, "Even more so happy for Lloyd. We're really close. It's cool to see him. You know I always want to see him do well except when they play against us."

The Hawks entered the season with an obvious goal in mind, development. The team was mere remnants of that 60-win team from a few seasons ago, with Kent Bazemore being the sole remaining member of that squad. They drafted, and then immediately traded, Luka Dončić for Trae Young and would soon entrust the team to the then 19-year-old point guard. Hawks also added Kevin Huerter and Omari Spellman to the roster and the murmurings of general manager Travis Schlenk's plan reflecting that of what he was a part of at Golden State began to surface. The Hawks were one of the youngest teams in the league, leaving out veterans Vince Carter and Jeremy Lin to truly reflect their average age, so LP was in for a task.

Some media personnel from different outlets were not high on the Hawks' offseason moves, with a few projecting their record would be worse than the previous season. As head coach, LP would not worry himself with the statistics and numbers, "I don’t go through the year and say ‘I’m doing a great job! Or I’m doing a poor job!’ to me the only focus that I have…do I have every single guy in a good place? If not, you know, how do we get there?” His judgement of how the season was progressing rested mainly on the growth of his players.

Going from assistant coach to head coach means a lot more responsibility amongst other things but what's been one of the challenges that LP focuses much of his time on? Making sure each and every player is happy or at least content.
If I got a really disgruntled or angered player, that’s on me. And that goes from our two high minute guys - John and Trae - to our low minute guys - Justin. Because Justin affects the locker room just as much as Trae affects the locker room so we're trying to create a culture, we're trying to create an atmosphere where guys understand and are committed to getting better. And that’s important. So it’s important for every guy to feel empowered to be a part of it knowing that it’s not an equal opportunity for every guy. So my evaluation really is that what’s the heartbeat of the team, what’s the culture, what’s the atmosphere like. I’m gonna blow some plays, players are gonna miss some shots, we're gonna lose some games, we're gonna win some games. -LP

And Justin Anderson speaks about his coach's growth with glowing admiration:
He's very poised. He acts like he's been a head coach already for three, four years with his composure and big time outs, big play situations. He just walks in, and he's like 'hey look this is what we're gonna do, we're gonna believe in it.' He always has like a no-pressure mentality. He says it in front of us all the time, there's no pressure on him, there's no pressure on us, we just need to go out there and play. And for him to say that and also be able to go out there and do that, is big. I think he's been doing an unbelievable job with us being a young group that everybody thinks we weren't going to amount to anything and here we are putting ourselves in a position to try to get some respect around the league and they have to put some respect on his name as well. -JA

As we spoke at shootaround, LP's eyes still followed the few players remaining on the court but his responses to my questions were measured, making sure he made eye contact for emphasis. He credits much of what is seen on the floor in technicality to his assistant coaches:
I have great coaches, Chris, Marlon, Melvin, Greg, Nate and Matt, that, and I know this cause I did it, they do the day-to-day stuff. They run the drills. They prepare the scout. They’re spending time on the court doing development with the players. So I get to empower those guys to really coach and I have to manage kinda the entire situation. - LP

His personality seems calm and humble, like he is constantly in deep thought, observing. When speaking with him, regardless of what he's doing, he will make one feel like he's listening intently. This characteristic transfers to his team, which Hawks' veteran Vince Carter pointed out is one of LP's strengths:
He’s done a great job of just sticking to the details. When you inherit a team, you coming in and you trying to establish yourself as a coach and you want to implement the things that, your philosophies, that’s tough. You kind of have to balance the egos and all that. - VC

As I sat awaiting the Hawks at Houston game to start, I noticed a familiar, tall figure approach and sit next to me. "Hi, I'm Clyde."

"Duh, this is Clyde Drexler," is what my mind said but aloud, it was, "Hi. Nice to meet you. I'm Jameelah." With the immeasurable pleasure of sitting next to Houston Rockets' legend Clyde Drexler during the game, his clever commentary delightfully filled my left ear as the game progressed.

I overheard him offering praise to LP for what he had done with this young squad. The opportunity could not have been more perfect, I asked Clyde his opinion of Atlanta's new head coach. “I think he’s comporting himself very nicely. I think he’s got this team believing in themselves. They’re playing extremely hard for him.” Clyde went on to say that he was familiar with LP as an assistant coach on the Philadelphia 76ers and recognized his defensive strengths but that the Hawks’ offense was shining through this season. “I look at their sets, the way they play, the pace of play, and he’s spot on in the way he has this team playing for the future.”

"Everythang that I did, Different thangs I was told, Just ended up being food for my soul" - Goodie Mob

While it's not a requirement for the head coach of a team to fully embrace the culture of the city s/he has inhabited, it is both noticed and appreciated by the local community when that coach does. Lloyd Pierce has done everything but shy away from many things Atlanta. Seated courtside at Atlanta Dream games, tossed the first pitch for the Atlanta Braves game, cheered near the endzone at the Atlanta Falcons game and joined the Atlanta United's pre-match ritual. He has incorporated service events to give back to the community and hosted coaches clinics to provide guidance to local area coaches. LP does not even take full credit for orchestrating the various team expeditions.

"My mind won't allow me to not be curious" - Goodie Mob

Ambassador Andrew Young was invited to a practice as well as HOF'er Dikembe Mutombo and Congressman John Lewis.
To have Andrew Young come and speak to our team, and Dikembe, who embodies all of that, being a global ambassador, he embodies culture and different cultures and the acceptance of different cultures. We talk about wanting to have a first class organization, a world class organization and high character players, coaches, staff. Part of that high character environment is people that have a worldly experience or have invested time in finding out about other people, about other places, about other things. So I just think for a group of young guys, for them to experience things they probably wouldn’t do on their own, to do it together, it might pique someone’s interest. - LP
He also took the time to meet with Reverend Joseph E. Lowery and former Hawks head coach Lenny Wilkens.

The most satisfying part of this past year has not been what can be analyzed on the court or what has happened professionally, although LP is tremendously thankful for the opportunity. The most satisfying part has been the birth of his first child, his then six-month-old daughter, Maya Joy. With such a hectic schedule, Lloyd credits his wife with undoubtedly doing "an amazing job" while he's on the road and he relishes every moment of parenthood.
I think at the end of the day, you know, first year can bring a lot of challenges but things get put into perspective when you get to go home and you see your baby. It’s…it’s really not that challenging. You’re looking out for someone and you’re watching the growth, literally the growth of someone that you’re responsible for, everything else gets put into perspective very easily. The timing probably couldn’t have been more appropriate or better of how this really isn’t that challenging. This (parenthood) has a lot of real challenges to it. So it’s in a lot of ways eased the job and eased the year. - LP 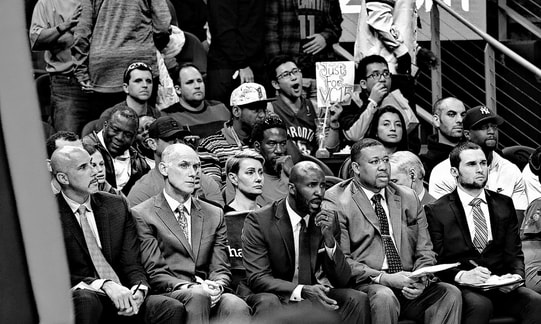