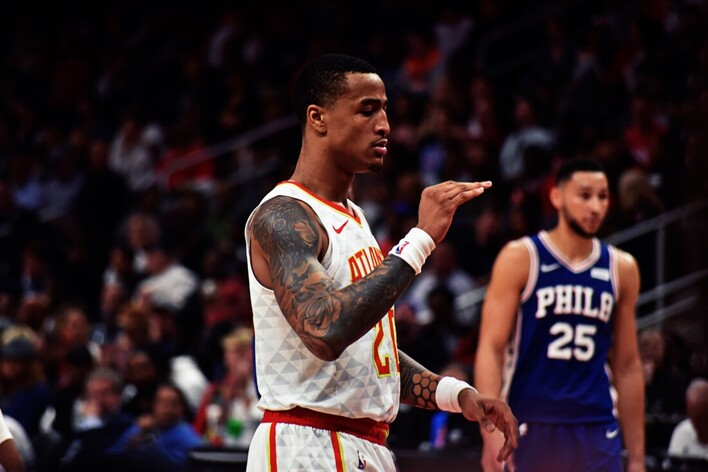 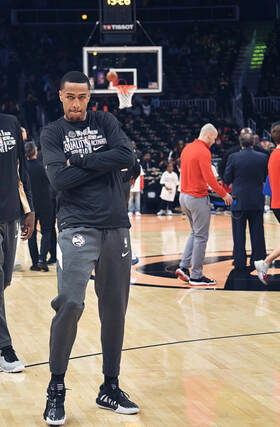 The phone rang, "Hey Jameelah, how are you?" The familiar voice was that of Atlanta Hawks' John Collins. Anyone who has met John knows how he interacts with those he comes across, whether on the regular or a one-time occurrence, he'll make you feel like a friend from way back. That amicable disposition is what makes the 23-year-old so well-received by fans, and his tenacity and drive are respected by fans, peers, and coaches alike.


Leading up to this interview, I sometimes reflected on how long I had known John. When he was drafted in 2017, the Hawks had a press conference for him, Tyler Dorsey and Alpha Kaba. It was one of, if not the most memorable press conferences I have ever attended. John cleared his throat and made the first comment as he was the one who was drafted first, "I already felt the love through Atlanta soon as I got drafted and this fanbase has definitely welcomed me with open arms, so has the coaching staff and the front office…so glad to be a Hawk, ready to get started...Go Hawks." As the press conference continued, John's personality began to shine through as his storytelling had others laughing and smiling and hanging on to his every word. Not long after, a group of media started to form around Lyria, John's mom, as she gave us anecdotes from when he was a child. John snuck up behind his mom, bent down to where his face was slightly behind hers and (loudly) whispered "No baby pictures," to which she laughed and replied "No baby pictures. They're in my phone, I haven't taken them out," and then grabbed his face to give him a kiss on the cheek.


Fast forward four years and John was wrapping up his first trip to the playoffs and the Eastern Conference Finals. He said his offseason has been pretty relaxed, a little vacation with his family, time spent with his son, Jaye, and how he also "secured the deal with the Hawks, Atlanta...my home." John feels that playoff run gave the Hawks some respect, "I definitely feel like our presence in the playoffs has given us the basis for energy and excitement and I'm definitely feeling that right now coming back to the city of Atlanta for sure."


“Let’s get back to work.” No big celebration. No party. No pomp and circumstance. Those words were said between John and his uncle after John and the Atlanta Hawks came to an agreement on a deal that would keep the forward a part of the team. The following day, John was in the gym. His uncle is involved with much of John’s basketball matters, “My uncle…that’s my number one dude.”


After he was drafted in 2017, he worked with (then) Hawks’ assistant coaches Chris Jent and Darvin Hamm. Chris Jent remains on the staff and is still heavily involved with John’s progress. John continuously wants to better his game, not only honing in on skills he currently possesses but also adding to his arsenal. "Specifically being able to create more off the dribble. Not to say I would be forcing more but just to be able to comfortably execute more perimeter-oriented and just be able to create at an easier rate...I just want to continue to improve because I want to and it just makes the game easier."


According to John, he’s a “simple man” who doesn’t need much to enjoy life…time with his son, a ride through the city “when there’s a nice sunset and it’s 70 degrees with a breeze,” his mom's home-cooked meals, watching Anime…and his game almost reflects the idea of effective simplicity. A perimeter shot with an impressive release (especially for a guy his size), a baseline turnaround jumper over a defender, a powerful dunk off the lob from his teammate Trae Young, all these things and more put together a package that the Hawks certainly didn’t want to do without. His favorite part of his game is his "ability to not need the ball." "Although I do feel like when I do get the ball, I'm very efficient in scoring in a bunch of different ways as you said. I feel like just the ability to be off-ball and still be extremely efficient, crashing the glass, rim running. Getting all of the quirky, weird buckets that don't necessarily show up on the stat sheet but obviously end up adding wins." John averaged 17.6 points last season while grabbing an average of 7.4 rebounds. He shot 55.5% from the field while averaging 29.3 minutes. He recorded 16 double-doubles and started in 63 games. John had five double-doubles in his first playoff run while shooting 54.9% from the field.


Coming off of that playoff excitement and being able to reflect on it while also spending time with his family, and largely his son, has expectedly been an enjoyable experience for John. Jaye, who most recently celebrated his first birthday, keeps his father busy. As John was interviewed, Jaye could be heard in the background, almost demanding so much of my attention that I wished I could ask him a few questions as well. “Da-da” was uttered at one point to which John patiently replied, “Yea, buddy?” successfully tending to both Jaye and me as he intently listened to the questions I had for him. John tries to show Jaye some of his favorite Anime “whenever he (Jaye) wants to watch” which results in one of two positives; either Jaye gets a nap in or he stays up watching with his dad. And it’d be foolish to think John hasn’t already introduced his son to the game of basketball. “He’s on the right track. I got him a little baby hoop….he already knows how to put the ball through the hoop.”


Growing up as a Black man in the US and now raising a Black son, John recognizes the injustices that occur in society and knows that, as an athlete with a platform, he can be called upon to raise awareness to those injustices. Much of his outlook has been shaped by his upbringing and, more recently, being a father. “Everything I do or everything I see or hear now is…I immediately think about how Jaye would perceive that when he’s older.” He wants his son to understand what is happening as he grows old enough to comprehend “what’s real.” John’s journey through fatherhood creates yet another lens with which he observes society. “Caring for somebody else is obviously a huge responsibility and it’s just making me grow as a man, you know…as a human as well.”


The foundation for John’s maturity and willingness to grow was poured by his family, with great emphasis on his mother. At the end of the playoffs, teammate Kevin Huerter declared that John wears the “mama’s boy” label proudly. Any time John is asked about his mom, his face softens and you can even hear the smile in his voice. When I brought up the topic of gifts that he’s received, it was only fitting his mom came up for both the giving and receiving sides. One of the most memorable gifts his mom gave him? Two WWE belts that John now has framed in his home. “I loved them so much that my mom was afraid to go outside with me because I wouldn’t take them off.” But when I asked John about a present that he really enjoyed giving, he struggled to think of one. “You know, I’ve always felt like I’ve been a historically bad gift-giver.” When he gifts someone with a present, he’s generally just hoping it can be of use to them. Then he thought about it some more and came up with one, something he purchased for Lyria when he was first drafted. “I got her a nice little car she always wanted…I had to do it for my mama. I’m happy if she’s happy.”


One would think an adult might not remember the particulars of their young childhood but not John, who has vivid memories of living on the island of St. Croix, USVI, where his mom is from, when he was around four years old. “I remember so much…It was a big part of my childhood when I was in St. Croix.” He recalls the large pet dog who always tried to run him over, living in a brick house with no AC (which is/was common on islands which thrive on that wind from the ocean), the family he lived with and would see throughout the area. He enjoyed when he and his mom would visit from time to time but, due to Covid-related restrictions, he hasn’t returned yet.


John has one longterm personal basketball goal after his days on the court are done, the Naismith Basketball Hall of Fame. “In terms of basketball, the one goal that I have that I feel like I can just continue to strive after is I want to be in the Hall of Fame…I want my face in that building in Massachusetts forever…I feel like the Hall of Fame is one of those where I have more control than all the others (such as MVP or other end-of-season awards).” When it comes to his goals in life, that’s where John is still deciding on as he goes along, though he already has a couple he’s working on. “Life, I’m still trying to figure out completely, outside of just raising my son and making sure he’s the best man he can possibly be….Taking care of my family.” 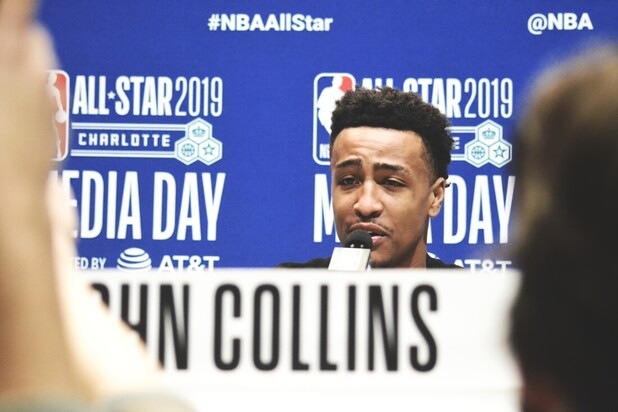