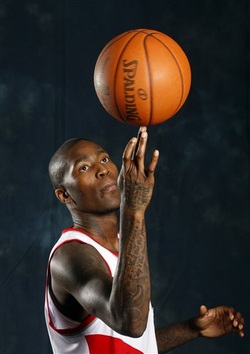 (Credit: http://www.blazersedge.com)
_ He's baaaaaack! Jamal "Crossover" Crawford is back in town as his new team, the Portland Trail Blazers, faces the Atlanta Hawks at 8pm EST, Wednesday, on ESPN. I had a chance to catch up with Jamal, who hasn't even been away from Atlanta for a year yet, to see how he's doing. We talked fans, fun, and fundamentals.

"It feels different [to be back in Atlanta]" is Jamal's response to returning to the city in which he played for two years and was named the NBA's 6th Man of the Year. This is the first time he has been back in some months and it just feels "weird" to be here as a visitor now. Jamal recalls his favorite restaurants including Eno by Zaza (Pachulia, that is) and regular staples such as Gladys Knight and Ron Winans’ Chicken and Waffles and Justin's. Although it has been awhile since he has hit the floor as a Hawk, Jamal definitely remembers and misses how the Atlanta fans made him feel. Some of his fondest memories from playing for the Hawks come from his interactions with the fans, "I miss the fans, the people, they were so genuine." Hawks fans generally get a bad rep, but Jamal knows them differently, "I think the people that came out [to the games] and ALL the people I saw on the street were so supportive. Those are the people I'm talking about."  Not only are the fans missed, but Jamal's former teammates and some of the Hawks staff also. "I had been there for two years, and we'd been through some wars together so that was like family," reminisces Jamal.

The "wars" were not all that sprinkle Jamal's memories, he enjoyed so much more about playing for the team; he was fond of his first experience at a Season Ticket Holder event that allowed him to mingle with fans, the rivalry that was created with the Boston Celtics during the 2008 playoffs series that led to the subsequent years he was there, his first time being in the playoffs and his next time making the playoffs, and a couple notable plays in games that allowed him to sustain his pseudonyms as "The Closer," "Mr. Fourth Quarter," and any other names that indicate his way to end a game with a bang and a win. Does anyone remember that game winner against the Phoenix Suns in 2010? Or how about that banked three against the Orlando Magic (and Jameer Nelson) in the 2011 playoffs? Those two memories caused lasting imprints in fans' minds and Jamal's as well.

Although Smoove threw tape balls at Jamal on the charter bus as they traveled to and from arenas, something Jamal soon learned how to avoid by maneuvering in his seat so he could catch Josh Smith in the act, there is no intention of Jamal coming into Philips Arena and setting the floor and hoops on fire. Now, with that said, it does not mean it will not happen. Jamal intends to set out and assist his team in getting another "W" added to their scorecard. He is still trying to get comfortable with Portland, still looking to find his fit and accomplish what they need him to do for the team. Jamal has yet another coach and another playing system to get accustomed to, something that has of course hindered him from working on one set of skills to grow in his NBA years that have spanned over a decade. While this can be a negative to many, Jamal is always the optimist, seeing it as a way to learn from the various coaches and even use it in a possible future career of coaching of his own (high school, not the NBA).

Feeling a bit nervous before all games, really until he hits that first shot, Jamal knows he will be nervous before hitting the floor against his former team. At the time of our interview, he was not at all nervous, looking forward to helping his new team get a win and feeling the genuine love of the fans he had grown to appreciate in his two years as an Atlanta Hawk.