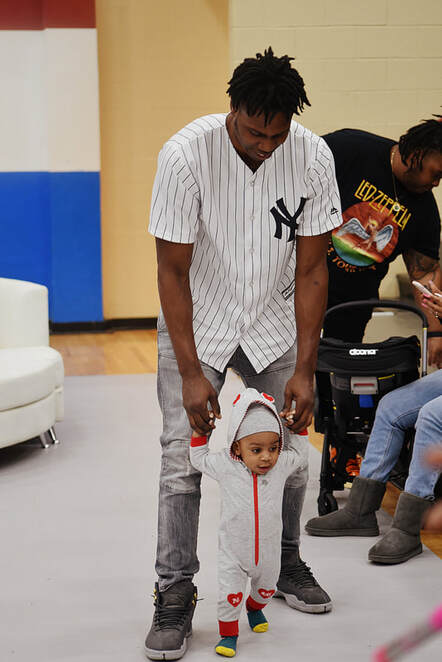 Treveon with his son, Tobi. 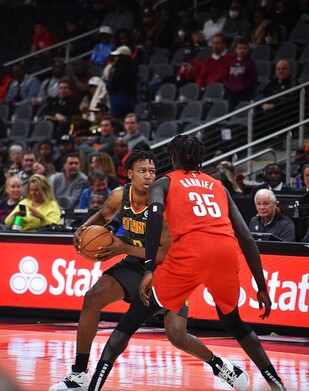 Treveon Graham against Portland's Wenyen Gabriel.
While the Atlanta Hawks faced the New York Knicks in what would end up being an overtime battle, the players on the bench began to hear murmurings about games being canceled. Hawks' forward John Collins said he heard it from a few guys on the bench and it was confirmed when he overheard an assistant coach on the Knicks’ bench, Hawks' point guard Trae Young said he heard it from his father before the fourth quarter, and Hawks' guard/forward Treveon Graham said he heard it from some fans. "Some of the fans were saying it was the last game of the season, the season was canceled," Treveon recalled from that night. Once the game was over, the team got confirmation that the NBA had indeed suspended games after learning a Utah Jazz player tested positive for COVID-19/coronavirus.

What ensued over the next week-plus would be unlike anything anyone anywhere had ever seen before. Recognizing the seriousness of the situation, many players know how fortunate they are. Treveon is one of them, being able to spend this time with his fiancee Melisa and their nine-month old son Tobias, affectionately called "Tobi."

"Just been spending time with my son. Trying to get him to start walking...He gets us up bright and early. Just play with him all day. When he takes naps, I spend time with my fiancee, play board games, we got some board games. We listen to music, learn new dances." They've even created a video or two for the popular TikTok app.

The day after the NBA announced suspending games, the Hawks did not hold practice as they figured out how to handle the practice facility situation. They decided to allow players to work out there individually, but the players just had to notify the team of when they planned on going. Treveon went a few times where he saw one or two teammates. The League then announced Thursday that they would be closing all of the practice facilities and players were advised to avoid gyms, fitness centers/clubs, etc. The Hawks had already decided to close the facility for the time being. Treveon said he had prepared beforehand purchasing items for exercising at home. Of course nothing compares to getting shots up in a gym or really training with a basketball but there are (much) worse situations.

If you follow any of the players on social media, you'll see that some of them are gamers...and a few would even boast heavily about their skills. Treveon is not one of the boastful ones, in fact, he admits he needs some practice. When asked whether or not he's challenged any of his teammates, Treveon quickly said he has yet to play them. "Nah, I gotta brush off some of the rust before I ask them to play. I haven't played in a while. Gotta make sure I can hold up on all the trash talk and everything." He admittedly hasn't played in some time but his go-to games now are NBA 2K and GTA, while also enjoying Call of Duty and some racing games. Don't sleep on him yet, though. Once he gets back into the swing of things, he might be challenging a teammate or two for a matchup.

The team has been using GroupMe to communicate and Treveon has found it to be immensely helpful. "I think that's good for us to have as a team, to be able to just go to one place and get everything we need from support to just getting information...Any questions you might have, they're always there. You want to hop on to the group and just ask them." The Hawks have been diligent about keeping their players updated and being there for them should questions arise.

Treveon and his family are taking the threat of COVID-19 as a serious matter. "I think the longer that this plays out, the more serious people will take it. Just staying inside and staying safe. I think that's the biggest thing. I know it's some people that have to go out and have to do certain things for their family or whatever it may be. But just being safe while you're out there."