The Development of 'Dre 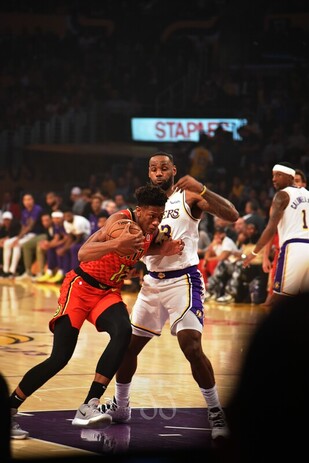 Saturday afternoon practice for the Atlanta Hawks has been long over. It's a beautiful sunny day outside, albeit a bit chilly. Most of the players have exited the court, save for a few; John Collins, De'Andre Hunter, and Cam Reddish stand out. The latter works one-on-one while the former two continue to work on some drills together which include perimeter shooting. As the lone media member remaining (everyone else already conducted their interviews), I can't help but feel a bit anxious about speaking one-on-one with De'Andre. It's not that he's intimidating or mean, he's quite the contrary. It's that he reminds me a lot of myself; quiet, reserved, unassuming, observant. Because of that, I wonder how it would be to find out more about him. How difficult it would be to get him to open up and share what he's experiencing with me. I soon find out, it's not difficult at all.

Hawks' PR brings De'Andre over and he gently smiles as we greet each other. He's having a solid season so far, he was averaging 12.8 points per game on 40.6% shooting while grabbing four rebounds per game up until the time of that 12/14 practice. He's had such great bursts of play that Head Coach Lloyd Pierce praised him by jokingly saying during more than one postgame interview, "He's not a rookie."

De'Andre is not one to boast about his play, in fact, he wants to improve on "basically everything honestly. Defensively definitely." He credits his time at Virginia for his poise and his approach to the game, "You have to be a mature player on the court. Tony Bennett doesn't like turnovers. And if you watch us play, we have to take the right shots."

But with his prior experience comes a bit of a challenge, he'll have to "cheat" for the first time. Coach Pierce says he wants De'Andre and the other rookies to discover their "nuances" or tactics which work specifically for them:
"I'm trying to get him to be more aggressive, more assertive. More physical. And that's what he continues to work on. I asked him if he ever cheated on a test this morning. And he kind of looked at me and he was like *LP imitates De'Andre by putting his head down* and I said, 'I believe you, unfortunately.'" He then recounts how he gave De'Andre the "answers to the test" for guarding Indiana Pacers' Doug McDermott. He wanted the rookie to tug or grab a bit, but De'Andre did not and he ended up losing McDermott twice. "You know it's one of those good things that you have, you know he respects the game, he respects the process of the game." Coach Pierce then walks the media through how Ben Wallace, one of the great defenders in the history of the game, established himself as just that. "That's a four-time NBA Defensive Player of the Year, I'm gonna listen."

De'Andre recognizes the need to develop his nuances. It's just a part of his mindset he'll have to change. "I think it'll definitely take time. I mean I feel like I'm getting better at it overall since the beginning of the season. But like I said, at Virginia it was a lot different than the NBA." He undoubtedly puts in the work, showing up to shootarounds and practices before the start time to get his shots up.

More than just his physical play, De'Andre wants to improve on being more outspoken. "Just talking more. I feel like the team definitely needs a vocal leader. Not saying that it will happen this year but maybe, time coming soon, I could gradually become that." He's realistic in the timetable for his personal expectations, not setting specific dates for his goals but knowing it is all a work in progress.
​
De'Andre's diligence doesn't go unnoticed. Coach Pierce knows these changes won't come overnight and it's about more than what's happening on the court. "He's trying to get outside of himself a little bit which is what you respect. He respects the process...Wants to be exactly right, wants to be perfect. Sometimes perfect is being a little bit different." 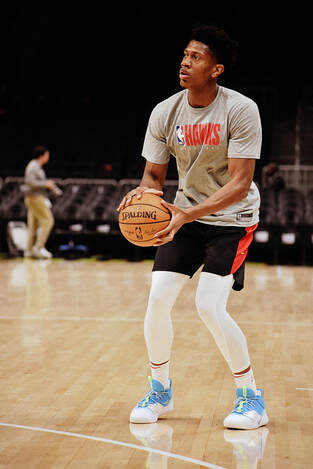